Australian Southern Cassowaries are an iconic flightless bird, as tall as an adult person (around 6 feet tall) with an impressive helmet (casque), black hair-like feathers, bright coloured neck feathers and freakishly large toes which make them closely resemble a dinosaur! In fact the Cassowary is one of the closest living species to dinosaurs.

Australian Southern Cassowaries are endemic to Australia and are found in the Wet Tropics region of Far North Queensland.

Cassowaries have been known to attack if they feel threatened. They are well equipped with weaponry and strength.

Enjoy watching Cassowaries from a distance and never feed them.

How did it get it's name?

The Cassowaries name is derived from two Papuan words – kasu, meaning horned, and weri, meaning head (more specifically their prominent helmet or casque). Their scientific name is Casuarius casuarius johnsonii and denotes that the Australian bird is a subspecies of the PNG nominate species.

The cassowary has also been named the most dangerous bird in the world. Their heavy, muscular legs have three toes bearing a large dagger-like claw used for fighting and scratching. Wild cassowaries are generally shy and avoid contact with people, however males can also become aggressive when defending their chicks.

75% of all attacks on humans by cassowaries in Australia involved birds that had previously been fed by humans. 22% of incidents involved cassowaries acting either in self-defense of defending their chicks.

Like all wild animals, cassowaries should be treated with caution and respect and not be approached.

How big are they really?

Southern cassowaries are the third tallest bird in the world with an adult standing up to an impressive 6 feet tall. The only two birds that grow taller are ostriches and emus.

What does a Cassowary eat?

Australian Southern Cassowaries have a diverse menu. They are predominately frugivores (fruit-eaters) dining on fruits and berries that fall to the ground in the rainforest. Their impressive height and ability to jump (up to 7 feet!) lets them also select fruits off trees and plants.

A Cassowary can eat up to 5kg (11 pounds) of fruit a day. They also enjoy plenty of fungi and sometimes hunt small animals such as rodents, snails and lizards.

They are not particularly fussy eaters and will also eat the occasional dead animal for some extra protein and will even dine on their own (or other Cassowaries) droppings!

What is the helmet on a Cassowaries head used for?

The function of their helmets (casques), is still a mystery though there are many possibilities for its use. Research says it may indicate dominance for age as it continues to grow throughout the bird’s life. Other research suggests it could assist cassowaries to hear the low vibrating sound made by other cassowaries as it connects to their ear canals. It may also act as a shock-absorber that protects the bird’s head as it pushes through the dense rainforest.

Another study observed by La Trobe University researches has revealed the casque may help cassowaries keep cool during Australia’s hot summers. They measured the temperature released from the casques of 20 captive cassowaries across Australia and found the birds released heat less from the casque in cold weather, and at a greater level when temperatures hit 36 degrees.

The casque is made out of honeycombed sponge-like material and covered with a thick layer of keratin, the same substance human fingernails are made of.  Although the casque is quite sturdy, it can be fairly easily be squeezed in the middle. Because the casque’s shape and appearance can greatly vary, individual cassowaries can often be identified by their unique casque.

Cassowaries great size and weight makes them unsuitable to fly. They also lack some of the anatomical structures associate with bird flight, such as a keel bone to which flight muscles attach.

They do still have wings, but they are small and rudimentary.

Their feathers are also not suitable for flying. 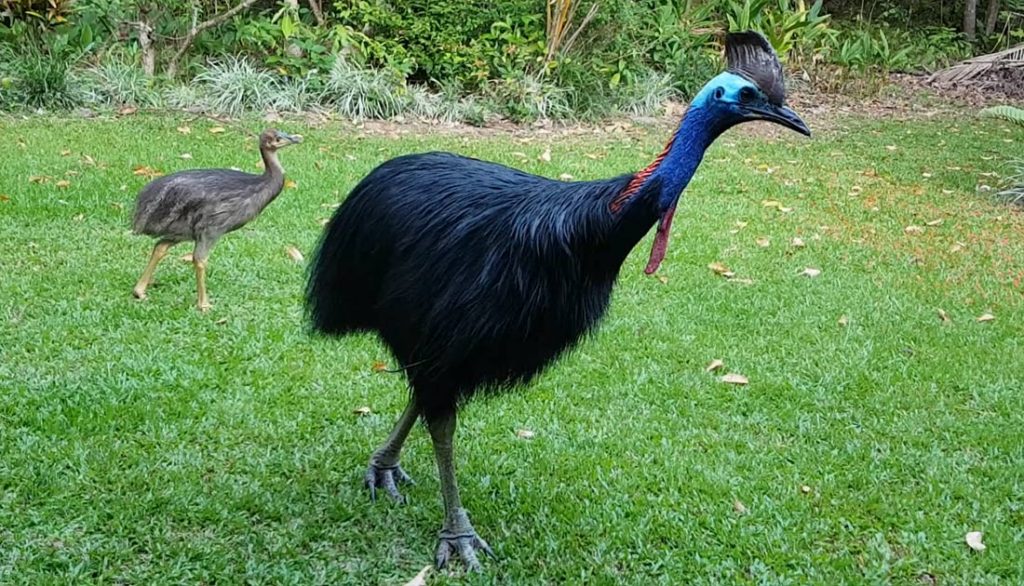 Who does the parenting?

Female cassowaries breed with several partners. After the eggs are laid, the male takes sole responsibility for incubating the eggs, which takes around 50 days. He never leaves the nest, not to even eat or drink.

Once the eggs hatch, the male raises the chicks for an additional nine months. He teaches the young cassowaries how to forage so they can fend for themselves. They become independent around nine months of age and reach maturity at around three years.

How many cassowaries are there?

Sadly the Australian Southern Cassowary is an endangered species. More than 80 percent of coastal lowland rainforest, which is the cassowary’s prime habitat, has been cleared over the past century.

A survey in 1988 of the Wet Tropics area estimates the cassowary population to have been between 2500-4000 adults, however a later survey had a slightly higher figure.

An increasing human population has had a serious impact on these magnificent birds. Vehicle strikes are the leading cause of mortality for cassowaries in Australia, followed by attacks by uncontrolled domestic and feral dogs and wild pigs. Diseases and natural disasters such as cyclones also affect the cassowary population. 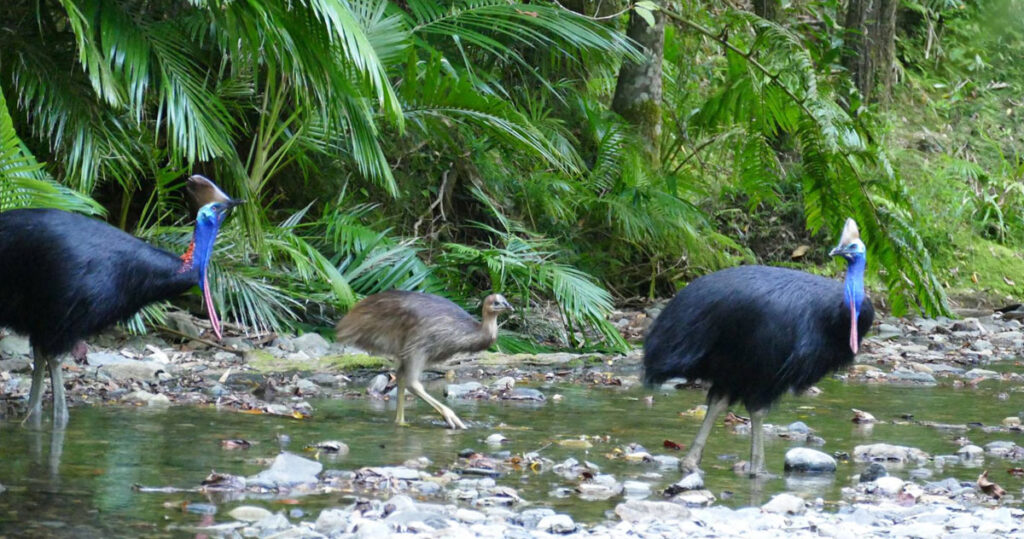 Heritage Lodge in the Daintree is ideally located in the heart of the forest and provides the ultimate retreat to relax and enjoy all the wonders the Daintree rainforest offers.

We are blessed that Southern Cassowaries both adult and chicks are frequent visitors to our lodge, and are sometimes spotted strolling through the forest foraging for rainforest fruits, sometimes they even take a dip in the creek. Cassowaries are surprisingly great swimmers!

For all our guests we ask them to respect the forest and the wildlife during their stay.

When in Cassowary land, please be Casso-wary!

Article by Gemma Heggie, Digital Spice on behalf of Heritage Lodge in the Daintree.